The Evolution of the “Hussman Chart”

Hardly a week goes by without an article like this one by the influential Henry Blodget — One smart stock market analyst thinks this is where we’re headed…(gulp). Mr. Blodget writes as follows:

But anyone who’s feeling comfortable after a strong week in the markets should at least understand that: 1. The macro environment most conducive to crashes is still in place (overvaluation + increasing risk aversion) and 2. The way the market is behaving now is exactly the way it behaved before the biggest crashes in history.

So, neither Hussman, nor I, nor you should be surprised if the market keeps on dropping and doesn’t bottom until it’s down 50% or more from the peak.

As Hussman noted last week in his usual depressing note, a 50% crash would not even be the worst-case scenario. It would just be a normal correction from valuations we reached in 2015.

Featured in the valuation articles is a chart purporting to show very low expected annualized returns for a multiple-year period. The implication for stock investors is clear: Little upside combined with huge risk. It has had a big impact both with individual investors and also my investment advisor colleagues.

Last week, among several other illustrations of popular investment misconceptions, I included a version of what I will call the “Hussman Chart.” I suggested that if you did not understand the chart, you shouldn’t be using it for your investment decisions. My main point was that people blindly accept conclusions from intelligent sources who use sophisticated methods. Of the are dozens of possible illustrations, I included the Hussman Chart. I know that many people sold their stocks some time ago when their investment advisors warned them, producing one of the charts I discuss below.

My worst fears were confirmed! Out of the thousands reading the post, only two or three explained anything about the chart – how it was constructed, what it implied, how to think about it. Quite a few people repeated the author’s conclusion. Wow! They understood and accepted the conclusion without any evaluation of the reasoning. Others did not want to be challenged. They wanted me to explain what I thought was wrong with the chart.

Readers promptly ignored everything else in the article. Some even concluded (amazingly) that I was stating that I personally did not understand the chart. Jesse Felder, a fellow investment advisor and blogger stated this viewpoint explicitly. His conclusion (without any explanation of the chart):

Furthermore, this negative correlation between valuations and forward returns is statistically very high (greater than -90%) and backed by 65 years worth of data. The Buffett Yardstick, as Hussman demonstrates, has been nearly as good as his own version at forecasting forward returns and is backed by roughly 90 years worth of data. Both charts, and the data and reasoning behind them, clearly demonstrate and validate the concept that, “the price you pay determines your rate of return.”

Apparently I need to elaborate on the original theme. I will do so by providing examples of “the chart” over the years. The variables, adjustments and time periods change, but the conclusions are generally the same. Each chart has a documented method and stands on its own. Together one gets a different picture. While the method is continually “improved” and the time period changed, there is never a date with destiny. We do not know whether the early versions worked or not. There is no distinction between the time period used to create the method and the “out of sample” period that follows.

Here is a summary of the charts below.

The rest of this report will show the evolution of the approach and raise some specific concerns and points that you might wish to consider.

[I have never met Dr. Hussman, but I have a generally favorable impression of him. He taught for a bit at one of my schools. (Someday I might learn if he considers himself a “Michigan man.”) He is respected as a philanthropist. His approach is intended to be in the best interest of his investors. Updating his methods and conclusions is a natural part of investment management. He reports his thinking frequently and takes on issues directly. Were this not the case, a review like this one would not be possible. He has built a very successful business and earned a strong reputation. His articles are always among the most popular, especially among investment advisors].

Analysis – the Evolution of “The Chart”

Second example — No Margin of Safety, No Room for Error October, 2010

This quoted explanation illustrates why some might have trouble following the methodology:

The two main failures of standard FOE analysis are that 1) analysts assume a long-term norm for the P/E ratio that properly applies to trailing net, not forward operating earnings, and; 2) analysts fail to model the variation in prospective earnings growth induced by changes in the level of profit margins, and therefore wildly over- or underestimate long-term cash flows that are relevant to proper valuation. By dealing directly with those two issues, we can obtain useful implications about market valuation.

As I have frequently noted, it is not theory, but simple algebra, that the long-term annual total return for the S&P 500 over any horizon T can be written as:

The first term is just the annualized capital gain, while the second term reasonably approximates the average dividend yield over the holding period. For the future P/E, one can apply a variety of historically observed P/E ratios in order to obtain a range of reasonable projections, but the most likely outcome turns out to be somewhere between the historical mean and median.

You have to get two things right: the “normal” future P/E and the prospective long-term earnings growth rate g. Standard FOE analysis misses on both counts. Very simply, looking out over a 7-10 year horizon, the proper historical norm for price-to-forward operating earnings is approximately 12.7. Moreover, one cannot simply apply the long-term operating earnings growth rate of 6.3% (0.063) as an unchanging measure of g. Rather, an accurate growth rate for the model has to reflect the level of profit margins at any point in time, since the current P/E multiple may reflect either depressed or elevated earnings. For a 10-year investment horizon, the proper value of g should take into account the gradual normalization of margins. Historically, the best estimate is approximately:

[Jeff]You should at least be able to understand that the earnings are “adjusted” by a method that is deemed to be appropriate. 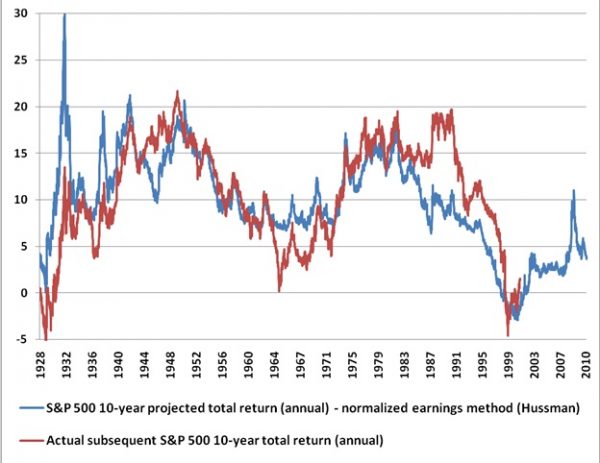 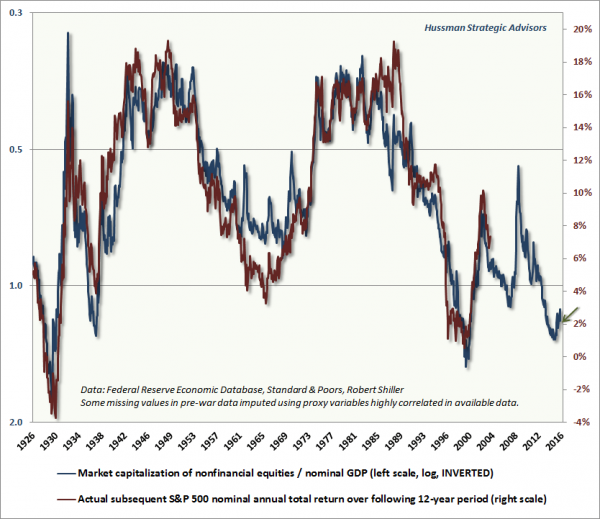 [Jeff] If you look at this chart and the two above, you will see that the big divergence in the late 80’s has disappeared.

Comments on the multi-year growth projections

These are points that would be discussed extensively if the research had a peer review.

This very brief summary is a glimpse of what a solid research design should include.

There should be a hypothesis and a test of the hypothesis.

It should be possible to disprove the conclusion.

Stated results should not consume all of the data.

It is best to share data, especially when not proprietary. This allows others to replicate the work. (One of the top economics books of the past year included a serious spreadsheet error, discovered because data were shared. It is fairly common in academic circles. Dr. Shiller shares his data, despite the great difficult in develop the historical earnings).

It is important to provide a complete description of the methodology. This should include paths not taken and variables that were rejected.

It is helpful to show the link (ideally with an update) of past research theses as more evidence emerges.

My Own Concerns about the Conclusions

Many have asked me why I have not followed this approach in my own investment management. I do not write about it very much because of the work required. Dr. Hussman has a great research budget and team. I have a small staff who are already fully-employed on stock picking and managing our programs. Going back to replicate one of the old charts would be a fair amount of work. I will share my concerns here, but only in abbreviated form.

I am especially bothered by what I see as exaggeration and distortion. What does it add to this discussion to call valuations “obscene?” I find especially distasteful the statement, “The CAPE Ratio id doing exactly what it has always done, which is to help investors anticipate the investment returns they should expect over the next decade. Those returns will very likely be in the low, single digits”.

The CAPE ratio is not some wise old friend that has been around for centuries. It was invented only recently and has not worked very well. The claim of historical validation is also completely wrong. What if I told you that the Packers always won at home after a double-digit away loss in a dome? (I made this one up, but you get the idea). It is historically accurate, but does not have any value for predicting the future. Since Dr. Shiller and Dr. Hussman made a lot of specific choices about measuring earnings, past time frames, use of inflation information, and future time frames, their conclusions should be described as a model, not some definitive historical record. It is rather easy to create a view of history that provides a vastly different conclusion. (see The Single Greatest Predictor of Future Stock Market Returns). It includes this impressive chart. 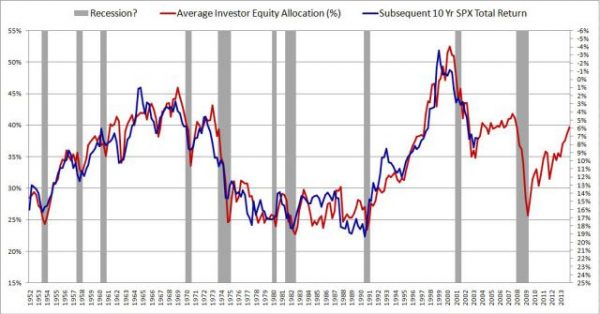 [Jeff] Similar approach, vastly different result. This is not the only such example.

My most important point is a plea, repeated from last week’s post: Be careful about investing your money using analysis you do not really understand!

Whether you share my concerns or not, I recommend a deeper look into these issues, with one of three conclusions:

Weighing the Week Ahead: What do the Mid-Term Elections Mean for Financial Markets?