Applying The Lessons From 2015

[This post originally appeared on Seeking Alpha last week.  I enjoy a wide following there, and I appreciate the opportunity to participate in their annual series.  As I note at the beginning of the interview, this is a very valuable resource.  I share the interview with readers of “A Dash” with the permission of Seeking Alpha.]

George Moriarty (GBM) — Thank you for once again taking the time to share your plans for the year ahead with us.

Jeff Miller (JM) — Thanks for inviting me to participate. The Seeking Alpha annual previews are extremely important for thoughtful investors. You always have interesting and diverse ideas from an impressive group of contributors. I enjoy reading the work of others, but it also helps me to focus my own ideas. I normally write about Weighing the Week Ahead, but this is Weighing the Year Ahead.

GBM — The start of this year has been pretty rough for investors. Does that affect your outlook?

JM — I don’t place any special emphasis on the first few days of the year. Most of the factors I am watching are event-driven, not the result of the calendar. The early trading this year has helped to create many attractive opportunities – mostly through excessive economic pessimism.

This year started with a decline in the Chinese stock market. I doubt that anyone could put together a cogent argument about why this was important for U.S. stocks, but the narrative caught on. For more information, check out my post here.

When we next got a rash of doomsayers and many slinging the “R” word, I wrote a post on that topic as well.

Despite this I am frequently asked about someone’s newly created recession model. The simple fact is that the debunking stories are not nearly as popular. No one cares about the plane landing safely.

GBM — What has so many investors/citizens feeling the economy is on thinner ice then? Why is this economy viewed so negatively by so many?

JM — This is something of a trick question! If we look at citizens, they have been reasonably positive. I track both the Conference Board survey and the Michigan Sentiment Index (which I prefer). People are reasonably upbeat about their personal situations, but critical of the overall leadership. Many in financial news interpret these surveys through the prism of the market, not realizing that the average person is not responding based upon a stock portfolio.

Another subject to consider: CEOs consistently predict their own business to continue growing at a healthy rate, though they tend to be negative about the state of the global economy. 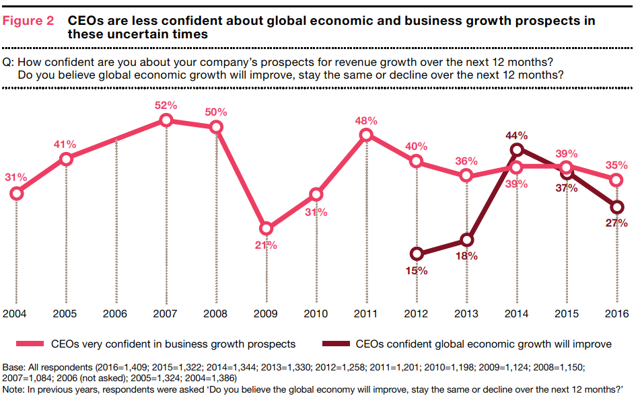 Investors are negative for a variety of well-documented reasons:

If your retirement funding plan is based on selling assets, it puts you in the position of being a “forced” seller to obtain the cash you need. Selling into a falling market can be scary. As the value of your assets drops, you need to sell more units to get the same amount of cash. If you are early in retirement, this is doubly harmful, because it has a disproportionate impact on the amount of remaining assets that you own.

Everyone needs a specific and personal plan.

JM — This is a particularly appropriate question. Normally a market veteran would not learn much of significance in a single year. 2015 was different, and the lessons are new ones.

I call it the Dominance of Trading. There is always plenty of short-term action, but it is now bleeding into the thoughts of long-term investors. Here is how it works.

This cycle of investor misunderstanding is new. As is always the case when Mr. Market gets something wrong, there is an opportunity for the thoughtful investor. To collect you need to fight your way through the daily emphasis on “explaining” the most recent market move – usually linking it to some prediction or macro theory.

GBM — Moving ahead, you and I both love politics. Given the dynamics of the early primary season, talk me through how you’re positioning for this election, which feels very different than previous years.

JM — You are absolutely right. As I recall, you are a political scientist from Fordham, a great school. And it is a very different primary season. Here are the key elements of difference:

It is a very interesting situation, especially for people like us. We remember that the front runners at this stage often met with surprises. Larry J. Sabato, Director of the UVA Center for Politics is my go-to source on elections. He recently produced an interesting and humorous summary of the erroneous conventional thinking in Presidential elections going back to 1960.

GBM — You thrive on taking the long view, but in managing a primary season, how do you suggest individual investors position themselves as the candidates get sorted out in each party?

JM — Most observers see investing through the prism of their own experience, without any questions about the relevance. I am going to do the opposite. My experience is that each Wall Street firm has someone with relatively modest political science credentials. They must write articles and make suggestions just as a matter of interest. They make small news into big stories. I have three admonitions for investors following the election:

With that in mind, here is what I am watching. In each case I am looking for a theme that gets some dominance in the public debate:

GBM — Back to investment topics, last year you emphasized that the business cycle has no expiration date. So where are we in the cycle now?

JM — This is the crucial question for the year ahead! Many observers note the modest economic growth and expect the U.S. economy to stall out. This would be virtually unprecedented. Cycles end with a peak in activity, higher inflation, and much higher interest rates – not the modest moves contemplated by the Fed.

None of the best recession indicators signal high risk. The business cycle is just about where it was last year. Eventually there will be a “big bang” and probably a late Fed over-reaction, but that could be years away.

Bob Dieli, who probably has the longest and best record on recession forecasting, updates the business cycle position monthly. His “where we are in the cycle” chart has not moved in the last year. 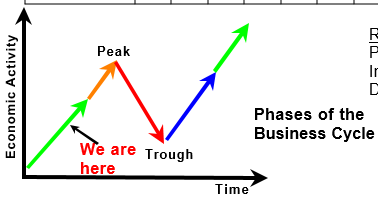 My best guess is that we will be discussing this same subject next year.

GBM — Where are the upside risks today?

JM — Let’s start with why stocks didn’t do better in 2015? Earnings growth stalled, mostly because of energy. Markets have traded in line with forward earnings expectations. This partly reflects the economy and partly the lagging sectors. Leading economist Brad DeLong describes six different shocks which have occurred during the recovery period. Most people impose some simple summary on the economic narrative, but this article provides much better insight.

It includes plenty of good charts like the one below: 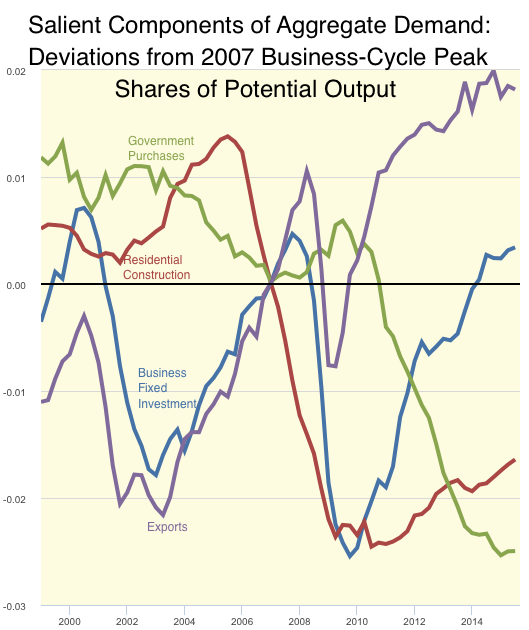 If we can avoid some of the episodic drags of the last few years, the economy will do better. A common mistake is to believe that a free-market economy requires constant stimulation. In fact, we have unused labor and capital available right now. Skeptics love to argue about the monthly payroll report and the “birth-death” adjustment. I monitor the actual count from state employment services – the tax collectors. This information trails by eight months, but it is certainly not overstated. Who wants to pay excess taxes? It demonstrates that new business formation has been quite healthy.

This gives us an opportunity in stocks that will benefit from better growth and higher interest rates. People may also be surprised to see P/E multiples move higher (!) along with interest rates. Multiples on forward earnings currently reflect a lot of skepticism on whether the “E” will be there. If the ten-year note got to 3.5% it would reflect a healthier economy, as long as inflation remains under control. JP Morgan’s excellent Guide to the Markets is a dream come true for those who love charts and data. 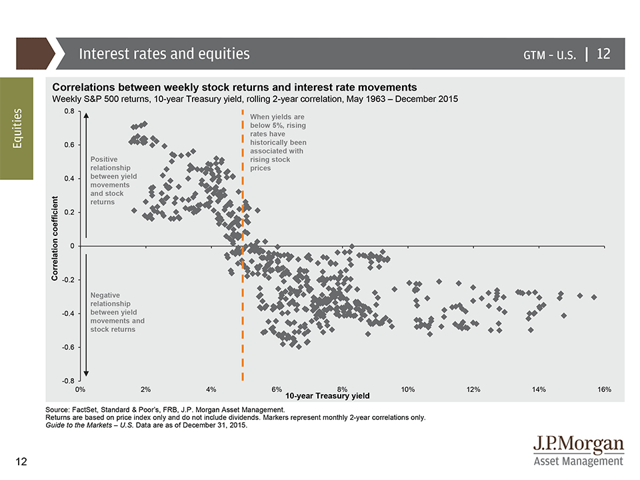 GBM — What other themes are you monitoring as we proceed into 2016?

JM — My basic approach is to look at the themes that reflect the “trader confusion.” Value investors trailed the market last year despite using excellent, time-tested methods. The top twenty stocks in the S&P 500 went up over 60%, but now sport a P/E in the 90’s. (EV to EBITDA is a more respectable 17.5). Stocks with earnings but a P/E below 14 were down 13.7%. This sort of discrepancy evens out over time. While no one knows the time frame for sure, I am positioning to benefit if 2016 is the “Year of the Value Stock.” We have a special report on this topic and the opportunities presented, available to readers on request.

Here are some themes where there was over-reaction last year. These are all factors that historically have been supportive for U.S. stocks.

Investors have been confused by short-term effects on all of these fronts. Those who understand the long run relationships have a great opportunity. Note the charts below (the vertical axes for both bond yields and crude prices have been inverted to facilitate comparison).

I expect the overall market to grow in line with earnings expectations and the economy. Astute investors can do much better by emphasizing last year’s laggards – materials, energy, some tech, and financials.

JM — We both know that forecasts should have time frames, and that is challenging right now. I expect most of my themes to play out over the next year, but we might need to wait until Q2 earnings.

And finally, most people appreciate some good examples as well as data. Here are three recent ones from CNBC (when I accidentally left the “mute” button off).

Investors who can get a grip on economic fundamentals have plenty of choices. I follow quite a few value investors and they all have a list of stocks they really like. One recently said that he was like a “kid in a candy shop.”

Thanks for reading! As always, please feel to share your thoughts in the comments section below.